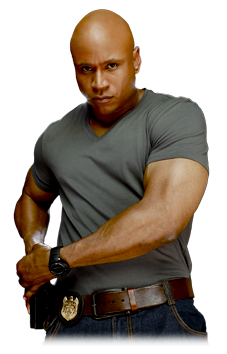 Samuel "Sam" Hanna is an NCIS Senior Special Agent and former Navy SEAL. He’s also a member of the OSP in LA, which is Run by Operations Manager Hetty Lange. He is partnered to his good friend, Grisha “G.“ Callen.

He was born in the 70s. As a child, he was sent to Military Academy by his father Colonel Hanna who served in the Marines. He disciplined Sam very hard and was disappointed when Sam joined the Navy instead of the Marines.

After finishing Military Academy, Sam enlisted in the Navy and achieved his dream of becoming a SEAL and becoming a part of SEAL Team 6. During his time as aSEAL, Sam served in Bosnia, Afghanistan, Chad and Iraq. While on a mission in Bosnia, Sam along with another member of his unit, Bryan Dickerson were captured and tortured before being buried alive, Dickerson who had been shot died of his wounds before the rest of the unit rescued them.

At some Point, Sam met and befriended fellow SEAL LCDR Steve McGarrett, who promised him a steak dinner.

Sam eventually left the Navy as a Senior Chief Petty Officer and applied to NCIS, which resulted in him being assigned to the OSP.

However, at the end of Episode: Legend (Part 2), Callen was wounded in a drive-by that Sam also happened to witness and in the next Episode: Semper Fidelis, was described as being in critical condition.

In Season One, it was revealed that Sam brought a young Sudanese boy named Mowahd Dusa to the US while still working as aSEAL. He killed Moe's father during a mission in Chad.

In Season Four, it was revealed that Sam’s wife, Michelle used to be a CIA officer. They met and fell in love while working on a failed mission to capture Russian Arms Dealer, Isaak Sidorov. At the end of the season Sam and Deeks got captured and tortured by Sidorov and his men while Michelle was pushed out of a building and left hanging.

Callen and Sam are trapped in a Submarine that is headed for an aircraft carrier. The sub has been made into a torpedo and they are going to explode with the sub. They bust a hole in the sub to make their captors open the compartment they are trapped in. They then kill their captors and escape the sub. The Navy blows up the sub just as Sam and Callen escape. They blew it up because there were terroristsaboard.

In the Two-Part Season Finale (Episodes: Uncaged & Unleashed), Michelle, was kidnapped by Michael Sherov. Sherov was working with Tahir in a ploy to get Sam to release Tahir from prison. Michelle was put in an air-sealed room for the duration of the episode, as Sam and the team work to release Tahir in order to save her. Eventually, The team figured out Michelle's location but by then it was too late. Michelle died from Carbon Monoxide Poisoning.

Following The Death of His Wife, Sam sold the house. He gave most of their belongings to Charity, except for mementos he and his children kept. The friend who cleared out Sam’s house kept Sam’s tools.

In Season Nine, Hetty has disappeared, apparently having retired from NCIS and sold most of her properties and taken her boat. Following Hetty's departure, Executive Assistant Director, Pacific Operations, Shay Mosley appears to take her place and oversee the team. Throughout the season, Sam and the team are concerned regarding Hetty's disappearance and begin to try and locate her. Eventually, it’s revealed Hetty has Traveled to Vietnam to rescue Harris Keane, a former member of her CIA Unit during the Vietnam War that Hetty thought was deceased but later finds herself captured by a notorious Human Trafficker and criminal Dang. Hetty’s survival was eventually confirmed by a Joint Operation combining the team as well as Hetty’s former CIA Unit in Vietnam , with Keane and Hetty both making it out. Hetty resumes her duties as Ops Manager, but finds difficulty working with Shay Mosley who Intends to break up the team.

In the Season Nine Finale, Sam along with the rest of the team, learn the truth about Mosley's kidnapped son and Callen's promise to help her when they come into contact with a suspect on a current case who is connected to Mosley's former lover, Spencer Williams. Upon learning this information, Mosley sees this as her chance of finding and getting her son back. Mosley and the team learn they are in Mexico, but the Off-The-Books Mexico Mission to rescue Mosley's son was dangerous, putting the team at risk. Even though Deeks is fired by Mosley after confronting her about her behavior, Deeks still joins the team on the mission to save Mosley's son. However, while the mission is successful, reuniting Mosley with her son and returning them to LA Together, the rest of the team are struck by an RPG while escaping in their SUV, leaving uncertain who is dead or alive.

Shortly after the Season Nine Finale, Sam and the team are revealed to have survived the RPG that hit the SUV. Kensi is the least injured but becomes extremely worried when Deeks has since remained unconscious following the explosion. The team are forced to separate so Callen & Sam take a dirt bike as far as it can go. After the bike cuts out they walk through the Desert to safety and shelter. Eventually, Callen & Sam run into a kid who leads them to shelter then finds help, the kid came back with his parents who manage to get to a hospital. Callen & Sam regroup with Kensi, Deeks & Turk and while Callen, Sam & Deeks are in the ER, Kensi & Turk stand guard outside and get ready for a fight from Spencer Williams’ men who are still hunting the team. At the last minute Mosley confronts Williams with dual wield pistols aimed at him telling Him “To stand down” after telling Mosley “No” she shoots him and tells his bodyguard to call it off because now that he’s dead no ones getting paid and so they did. After, the cavalry that Hetty sent arrives and evacuates the team to Balboa Naval Hospital.

Retrieved from "https://ncisla.fandom.com/wiki/Sam_Hanna?oldid=17487"
Community content is available under CC-BY-SA unless otherwise noted.